Filming for Cracking The Spine officially began on Monday 9th September.
Here at Summit Fever we met up with Andy and Charlotte in the iconic Pen-y-Ghent cafe to do an interview with the husband and wife team.  If you have never been go and check it out.  We inadvertently managed to take over half the cafe, but the owners couldn't have been kinder and more welcoming, and the locals looked on at us with bemusement as they sign languaged their order over the  counter.

To me Pen-y-Ghent is one of the greatest mountains in the area.  It may not have the height of it's Alpine counterparts but in every way it charms the pants off people.  I am not digressing into a travelogue expounding the rural attractions of northern England, it is on The Pennine Way and quite a significant landmark on the route being at around the 90 miles mark. 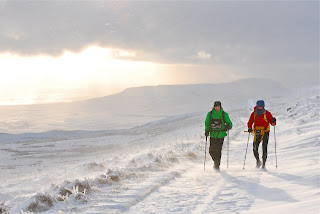 The Spine Race 2013 -Pen-y-Ghent in the background


With England, the big danger of the outdoors and our national parks is to underestimate them.  Oh it's only England you may say, what the worst that can happen?! We quite easily forget that out there we still have wildernesses untouched by phone signal, uninhabited moorland stretching for miles in every direction, treacherous peat bogs and mist that can descend in seconds leaving you  blind on a featureless landscape - and this is the Summer! Bring Winter along and it adds a completely different and very scary dimension.  Oh, and it does snow properly, as everyone who lives North of the M25 can testify following the antics of the weather gods March 2013.

It seemed an apt place to begin filming Cracking The Spine, as it was close to the place that Andy called it a day earlier this year, when he attempted the Spine Race 2013.  Not that we are mean or provocative, but with Pen-Y-Ghent looming in the distance it was hard to forget the challenge that lies ahead for Andy. (Yes we are mean)

It became evident as the interview progressed that not only and obviously do you have to be incredibly fit to even contemplate loading the race website onto your browser, you have to be mentally strong, maybe more so than physically.  There are not many people out there who can cope with putting their bodies through hours and days of pain, but being the social creatures we are, to be alone in the cold and the dark and in the wild takes a very different type of mentality.   This is not only Andy we are talking about - when you take in Charlotte's extraordinary support and wall of strength you see an unbeatable team before you.

One aspect we will explore in the making of the Cracking The Spine film will be the effects that this kind of extreme undertaking has on the body but more interestingly and perhaps more difficult to pinpoint, the mental effects it has on the brain.  What is it that Andy has up there that pushes him on when everything should be telling him to stop?

One person who is familiar with this kind of punishing behaviour is the race director and brainchild behind The Spine Race - Scott Gilmour.   Scott practices what he preaches and took part in the Yukon Arctic Ultra before he began organising the Spine Race.  He is certainly no stranger to the risks and obstacles that lie ahead. 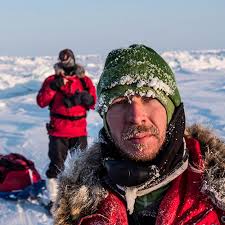 
Scott is, as well as being a race director of extreme events, a film maker.  Here is a link to the film he made of The Montane Yukon Arctic Ultra

It is with huge thanks to Scott Gilmour and Phil Hayday-Brown that we are able to start this project.

Posted by Cracking The Spine at 09:49

Cracking The Spine
Britain's most brutal footrace takes place this january: The Spine Race is 268 winter miles south to north on The Pennine Way. In 2013 nine competitors finished within the 7 day limit and experienced ultrarunner Andy Mouncey wasn't one of them. In 2014 he aims to put that right. Limited daylight, remote wilderness and winter weather will combine to make the hard miles even harder, and on top of that Andy will also need to control his own demons and beat the toughest competitor of all - himself.