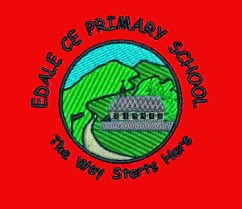 It's always a pleasure going to Edale, despite it being only a few minutes drive from where we live, it feels like you are stepping back in time.  It is particularly important to us here at Cracking The Spine as it is of course the beginning of the Pennine Way, which gives rise to all sorts of symbolic stuff for Andy and the rest of the competitors.

Edale primary school is small but has a huge personality! There were 13 children and their techers waiting expectantly for us this morning.  We were also joined by Darren Hunt, who has been a great help supporting Cracking The Spine on Facebook.  He had the pleasure of being Andy's glamourous assistant….

We have certainly come across many mini athletes on our school rounds, and Edale, no surprises, has it's fair share, they were certainly already pretty clued up about running as a sport and they were certainly giving Andy a fair grilling when it came to question time.
They looked on in astonishment as he told them about his epic triathlon from England to France, although as he was describing his English channel swim, I did hear a small voice pipe up exclaiming, ' That doesn't look very hard!'.    Hmmmm...challenging talk! 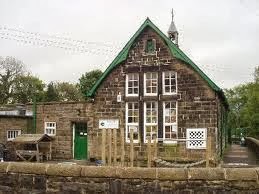 It was great to have a Darren along, he is going to be doing the Spine Challenger this year, which is no mean feat in itself , being 106 miles in length, from Edale to Hawes.  It's always good to put a face to a name, especially as Darren has been a huge help on Facebook spreading the news on our project and encouraging funding.  He led the children off on the first mile, starting from the beginning of the Pennine Way.  I'm pretty sure I saw Darren and Andy looking more than a little uncomfortable at the thought of what lies ahead come January, mwahahahaha.    I'm also sure that you lot doing the race will certainly have quite a few young supporters at the start in January!  The children loved the idea of being able to follow the progress of the race and come and meet the runners in January.

I know I mention it every time we come back from a school, but it is amazing to see so much enthusiasm in the children and the teachers - everyone is full of beans, the teachers are just as excited as the children.  It's fantastic to see children being given every possible opportunity to try new things and encourage to discover new hobbies and sports.

Being at the beginning of The Pennine Way and at the heart of a National Park, Edale school has a very special relationship with the National Park Rangers, and we had the pleasure of meeting up with an Area Ranger - Sheila, who kindly gave up a few hours of her busy morning to talk to us about the work she does out on The Pennine Way and how it is so important to educate the children about he very special place they live in.  After all they are our future and all that!

Everyone we have spoken to and who has heard about Cracking The Spine, has given us amazingly positive feedback, and have bent over backwards to help Andy and us to get things going.  It's impressive to hear the daily work that goes into maintaining areas such as the National Parks, so that we can enjoy them and run all over them.  You better keep your eyes peeled in January as there is all sorts of unusual wildlife out on The Pennine Way, for instance, fact for the day - did you know that we have Arctic Hares living on Bleaklow?!

Sheila also stressed the importance of not underestimating the wildness of our national parks - it being all too easy to do just that, even the more experienced among us I'm sure have taken our more diminutive peaks for granted!

More on that in the film - don't want to give it all away!

Posted by Cracking The Spine at 10:35

Cracking The Spine
Britain's most brutal footrace takes place this january: The Spine Race is 268 winter miles south to north on The Pennine Way. In 2013 nine competitors finished within the 7 day limit and experienced ultrarunner Andy Mouncey wasn't one of them. In 2014 he aims to put that right. Limited daylight, remote wilderness and winter weather will combine to make the hard miles even harder, and on top of that Andy will also need to control his own demons and beat the toughest competitor of all - himself.